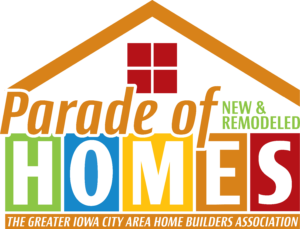 20 at scattered sites in four different cities and virtually. The event, which spotlights 21 homes, is a chance to gather ideas and inspiration for an upcoming home project; learn about the latest techniques and trends in homebuilding and renovation; or simply be wowed by fabulous craftsmanship. The Parade of Homes website is at iowacityhomes.thegazette.com.

Seven new-construction homes are virtual only. The schedule for the remaining 10 new dwellings, located in Iowa City, North Liberty and Tiffin, is:

The 24th Remodelers Parade highlights four whole-house renovations in Coralville and Iowa City. One of them is the first ACE (Architecture-Construction-Engineering) Student Remodel, a partnership among the Iowa City Area HBA’s Vocational Training Council – which supports skilled-trades education, Kirkwood Community College, the City of Iowa City and the ICCSD. Its schedule is:

“The community gets excited about the parade, and we’re thrilled to showcase work from so many Iowa City Area HBA members,” said Jason Wells of Vetter’s Culligan Water, who co-chairs the Iowa City Area HBA Parade of Homes Committee with Mitchell Manning from Sobaski Abbey Carpet & Floor. “The parade offers something for everyone, from couples starting out to empty nesters.”

Tickets good for all days cost $10 and may be purchased at the Iowa City Area HBA (11 S. Gilbert, Iowa City) and each parade home. A portion of sales go to various nonprofit organizations helping at event homes. Each buyer may complete one entry form for a chance to win $500 toward an Iowa City Area HBA business of their choice. Forms may be printed from the parade website or found in the guidebook, available June 6 in The Cedar Rapids Gazette and at various businesses, and turned in at the first house. The guidebook also offers a fold-out map of all homes, builder details, subcontractors used and articles about the home-office trend, how to decide whether to build or remodel, ways to increase your home’s value and much more. Banners on home listings indicate how and when they may be toured.

“Homes on the parade differ in how they may be viewed,” said Manning. “Some are virtual-tour only, others just the second weekend and the rest available to physically visit throughout the parade. All homes will be available on the virtual tour after the parade concludes.”

The jaw-dropping, 360-degree virtual tour is accessible through the website and ParadeSmart mobile app. With the app, visitors also can more easily find where they’re going and information they’re seeking. It’s available via Google Play, the App store or by scanning the QR code in the guidebook and on area posters. Once downloaded, choose Parade: Iowa City Area HBA Parade of Homes. Additional features include the ability to select homes and create a custom map; driving directions; marking houses visited; filtering for select criteria, such as city and price; a section for notes, photos and ideas; and voting for the People’s Choice Award. Visitors tap their favorites in five categories: kitchen, bathroom, interior design, landscaping and overall. The overall winner will be featured on the 2022 Parade of Homes guidebook and poster.

Numerous builders, subcontractors and material suppliers are featured in the homes, which have a wide range of prices. Besides touring the homes, ticket holders have the chance to speak with builders, designers, contractors, realtors and others involved in many aspects of the home-building industry.

Cyclists can pedal their way through the parade on any dates in the Urban Acres Real Estate Bike Ride. Two suggested routes are outlined, one in Iowa City and a second in Tiffin/North Liberty. Start at Urban Acres (250 Holiday Road, Coralville) or anywhere along the routes. Enter the social media contest for a chance to win a gift certificate to an area bike store. Details are at urbanacres.com/bikeride or in the guidebook.