“It was a great honor to be selected to participate in the workforce development event. The whole experience was eye opening, and I enjoyed hearing education and following employment stories from those in attendance,” Cullen said. “I think a lot of credit should be given to those who have worked hard to promote workforce development and hope President Trump continues to fund education for people to go into the trades. The world needs all different occupations, not just doctors and lawyers.”

Cullen was selected after Mark Pursell, CEO of NAHB’s philanthropic arm the National Housing Endowment, asked McCreedy-Ruth Construction’s Tim Ruth, who represents Iowa on the NAHB National Board of Directors, for a recommendation. It had to be someone from Kirkwood Community College involved with the school’s NAHB Student Chapter who had switched their career path to construction based on their experience attending an Iowa City Area Build My Future event. Build My Future is an initiative aimed at engaging youth in the skilled-trades industry.

Cullen, a 2018 graduate of Riverside’s Highland High School, became interested in the trades while participating on the 2018 award-winning Student-Built House Project in Iowa City, which falls under the Build My Future umbrella and is a partnership between the Iowa City Area HBA’s Vocational Training Council (VTC) and Kirkwood. Cullen is working on this year’s house too, which will belong to nonprofit Reach For Your Potential.

He also taught junior high students house framing with the McCreedy-Ruth team at the inaugural hands-on Build My Future-ACE Construction Career Day & Industry Showcase April 2 in Cedar Rapids. Pursell and Ruth were two leaders in attendance at the event put on by the (VTC), the Greater Cedar Rapids Housing & Building Association, Kirkwood and the Eastern Iowa ACE Sector Board.

Ugalde commended the White House’s dedication to workforce development. “NAHB applauds President Trump for his tireless commitment to expand job-training and apprenticeship opportunities for students and mid-career workers alike so that they will develop the skills and tools needed to secure well-paying jobs and succeed in the American workforce,” Ugalde said. “With the housing industry grappling with severe labor shortages, NAHB is pleased to do its part to help in this vital initiative by pledging to train 50,000 new workers over a five-year period for a career in the residential construction trades. Our commitment to workforce training starts with the Home Builders Institute (HBI), a member of the NAHB federation, and a national leader in workforce training for the construction industry.”

The National Housing Endowment also contributes to this effort by supporting innovative and effective programs, scholarships and grants that further education, training and careers in the residential-construction industry. 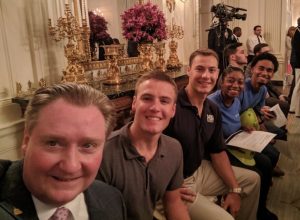 Cullen Klebe (second from left) and National Association of Home Builders Chairman Greg Ugalde (left) waits with other students at the White House for the July 25 first-anniversary commemoration of the National Council for the American Worker to begin.